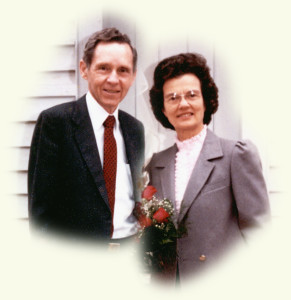 The Hereafter, by Warren Wilson.mp3

Warren C. Wilson was born on February 25, 1923, in Kiowa County, Colorado. His parents, Elda and Ronald Wilson, were from pioneer stock–she from the Sand Hill country of Nebraska, and he from near LaCrosse, Kansas.

The pioneering spirit was still very prevalent in the high plains and prairies where Warren grew up, the second of six children. His father taught at a succession of one- or two-room schools in Colorado, and later, Kansas. At times the school might be at such a distance that Ronald would stay at the school all week and come home only on weekends.

This left Elda Wilson with her four boys and two girls to take care of the homestead. Wheat must be planted and harvested, and cattle fed, watered, and milked.

There was no TV or radio. Telephones came later. The Wilson boys built their own toy cars, trucks, and tractors out of apple boxes and tin cans. There were scale models, sometimes two feet in length, with independent suspension and other moveable parts.

When something on the farm broke, the boys learned to fix it, whether it were a machine or tool, barn or house. When they were teenagers, Warren’s dad bought them a 1929 Chevy for $60. Warren remembered how the car had to be fixed each week just so they could drive it into town on Saturday night.

In the winter 1989 issue of Outpost Centers Report, Warren told his own story:
“I was a farm boy growing up during the depression and knew the trials and hardships of life on the farm. As an unconverted 16 year-old, I had no concrete plans for the future. But what plans I had were far from the farm.

“One Sabbath morning I listened to the principal of the nearest academy praising the virtues of Christian education. For the first time in my memory I heard the quotation, ‘with such an army of workers as our youth, rightly trained, might furnish, how soon the message of a crucified, risen, and soon-coming Savior might be carried to the whole world!’*

“The following fall I found myself enrolled in that academy. I was called upon to give counsel to the maintenance man, the gardener, and others on every practical problem that came up with the truck, the cars, or the generator. I also found out that I was expected to know the answers to everything that had to do with gardening. the school was sadly … lacking in work opportunities for 175 students, many of whom needed to work to help defray expenses.”

“So after about a year, a letter came from his father, with a $20 bill and instructions that I was to transfer to a small academy in the South.

“When I left, I took two run-away boys to their homes and then drove the remaining 700 miles by myself. My old car burned out a main bearing before I got to Missouri, and without money enough to fix it or any way to pull out the engine, I poured in an extra gallon of oil and drove those 700 miles at 30 miles per hour, coasting down every hill to save gas and my engine.

“I was so low on money that I ate nothing but one candy bar during the last 24 hours of that night-and-day vigil. I shall always remember that ‘Dip’ candy bar. I bought it because it weighed a quarter pound and only cost a nickel. I arrived at Fountain Head Rural School on the morning of November 30, 1940, with 50 cents in my pocket.”

This was Warren’s initiation into self-supporting work. Each of the 40 students had to work a large part of his way, and the 400-acre farm provided plenty to do. Most of the milk and eggs, fruits and vegetables and even the grain needed by the academy and small sanitarium were grown at the farm.

His narrative goes on: “I was expecting to continue as a student leader, but I found myself among a highly capable group of young men who had already proven themselves and had the sought-after jobs like driving the truck, the tractor, etc. My first day of work found me carrying garbage and cleaning the Sanitarium rooms. It was a severe blow to my ego and provided some much-needed discipline…

“I found that these people were great students of the Spirit of Prophecy and seemed to believe every word. They were involved in a faith program, and to my unconverted mind they seemed willing to gamble everything on a mere promise in the Bible.”

Fountain Head School, under the direction of Ralph Martin, made a deep impression on Warren’s mind. But when he graduated two years later, he had other things to think about. He and his former classmate, Loretta Greenmore, were married October 22, 1942.

They went to Wildwood Medical Missionary Institute, in Georgia, in 1944. At the end of three weeks as a student trainee in self-supporting work, they confronted each other.

As they said good-bye to Elder W. D. Frazee, the President of the institution, he prayed with them. They never forgot the last words of that prayer. “Lord,” Elder Frazee prayed, “bless Warren as he goes, but if he’s a Jonah, bring him back!”

It was 1948. Their daughter Becky had been born and they were working at a self-supporting hospital in Tennessee. A cough and an X-ray revealed that Warren had tuberculosis. At that time it was a killer disease, and a horrible blow to the young couple.

“We went to the bedroom and fell across the bed and cried and cried together. To our young minds, it seemed like a death decree,” they remembered later.

But he didn’t die. Others around him in Nashville’s Ben Allen Road Tuberculosis Hospital did, however. Bigger, huskier, healthier-looking men. He was there for eight months; he had a lot of time to think.

Several years of invalidism slipped slowly by. He slept outside on the porch for fresh air. He recounted that one day he suddenly heard someone screaming, then realized it was himself. One lung had collapsed. This time he was in the hospital for 11 months, and the entire left lung was finally removed.

Somewhere during his five years of sickness, something happened to Warren Wilson. God had spoken to him. His second hospital stay found him with an entirely different outlook—a new heart. He was anointed, and he experience a slow, but miraculous healing. He was now a well man, with two-thirds of one lung functioning—a portion of the remaining lung was useless.

A deeply sensitive as well as practical person, Warren often expressed his feelings in poetry. Especially during his hospital months and years was this gift an outpouring of and a relief to his deepest emotions, the opening of a spring which flowed constantly throughout the rest of his life. For some of his poems he wrote accompanying music—music which blended with the words in a singularly appropriate manner. Some of his music may be found at the end of his book of poems.

In 1956, Warren and Loretta moved to Chattanooga, Tennessee, to work in partnership with his brothers in Wilson Brothers’ Piano Company. They worked hard and the business prospered. But this was no longer enough for Warren. They built a home in the country, not far from Elder Frazee and the Wildwood Institute. Before long Warren was asked to lead Wildwood’s missionary outreach programs.

He, Loretta, and Becky would invite people to a branch Sabbath School. On Sabbath mornings, they would go by and get neighborhood children and bring them. One by one the branch Sabbath Schools grew into church companies, then these companies needed church buildings. Together the group would build little churches.

Warren’s next step was part-time work at Wildwood on committees, then as business manager. In 1967, when the Wilsons were asked to become full-time workers, they rented out their home and moved on campus. In 1973, he was elected Executive Vice-President of the institution.

Recognition of his leadership capacities in self-supporting work led to his being elected a Vice President of ASI, a position he held from 1981 until his death. ASI stands for Adventist Laymen Services and Industries. It is a dynamic organization of Seventh-day Adventist laymen pioneering in Christian witness through business and professional activity.

The vision which drove him, however, was far bigger than Wildwood. He said later, “I dreamed of other training schools around the United States where young people could receive training in a short time.” The dream then extended past U.S. borders; there was even a mission station in Africa!

That was Riverside Farm, and the year was 1972. God had trained a group of brave young men and women at Wildwood, and now they were going out to dare and to do for God.

Riverside was only one step in a continuing expansion of medical missionary projects. Schools, restaurants, clinics, reconditioning centers, health food stores, and bakeries blossomed. These babes in the work needed counsel and encouragement from an experienced shepherd. Warren was of invaluable aid as he assisted them. Each year, he gave more and more of his time and energy to these institutions, a number of which were developed in areas outside of the United States.

Outpost Centers, Inc. (OCI), was a natural result of the need to coordinate this international program consisting of many completely independent institutions. Warren served as OCI President from its incorporation in 1983 until his retirement in 1988, a much revered and beloved counselor and supporter of the pioneering groups and of well-established institutions as well.

In the fall of 1987, Warren and Loretta found they faced one final battle together. This time it was cancer. While in Maine for treatment and surgeries, someone sent him a quotation which said, “Patience as well as courage has its victories. By meekness under trial, no less than by boldness in enterprise, souls may be won to Christ. The Christian who manifests patience and cheerfulness under bereavement and suffering, who meets even death itself with the peace and calmness of an unwavering faith, may accomplish for the gospel more than he could have effected by a long life of faithful labor.”** He turned to Loretta and said, “That’s too good to miss!”

By patient endurance, by positive, cheerful, hopeful words of comfort, his last days were rich with opportunities to witness. Then, for several weeks before his death, when darkness seemed to shut him away from God and the assurance of His acceptance, he clung to His Saviour with what he called “raw faith.”

His prayers always turned from self to intercessory prayer to God for His church and His people. Heaven, the New Earth, and the special resurrection (before Christ’s second coming) were topics he wanted to talk and read about.

On May 8, 1989, Warren Wilson fell asleep in Jesus at his home in Wildwood, Georgia. Loretta and Becky and her family, his mother and four brothers and sisters, and his Christian family around the world look forward with joy to the reunion.