The moment that we have been waiting for has finally arrived.  After 60 years of work the Transcription Project is completed!*

Praise God for making this possible. The Devil was unsuccessful in his attempts to stop this project. Despite the health challenges and having lost our best worker, the Lord gave healing and strength to the two remaining workers to see this project brought to completion.

Without the Lord using you to contribute financially and your prayers and encouragement we would not have been able to arrive at this glad day. Thank you all so very much!

Now, where do we go from here? There is still plenty to do in promoting and maintaining the ministry, not the least of which is promoting these transcripts. Besides all the recent efforts put into this project, there have been many dedicated volunteers through the years who have worked overtime to make this happen. Collectively, this project is the result of many workers, tens of thousands of dollars, and 60-plus years of effort.

Thank you so much for helping us accomplish the transcription project.   If you would like to also help support any of the above-mentioned ventures, please use the donation button below.

History of the Historical Restoration Fund 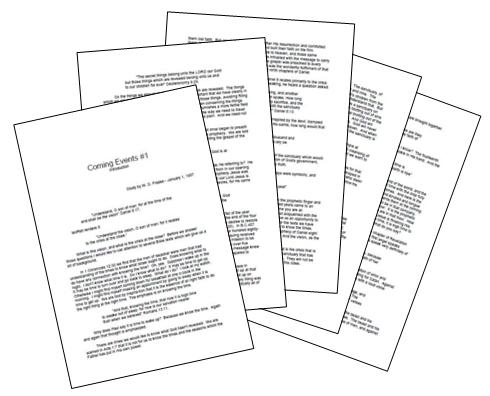 Because of God’s blessings through your prayers, donations and public relations we have been able to remaster the entire audio library of 1,673 messages, reprint all our major books, translate materials into other languages, build a heritage center and much more!

The biggest project has been transcribing all of Elder Frazee’s messages. It started many years ago as Homer Barrett and other Wildwood alumni began to transcribe Elder Frazee’s sermons. The blessing of having his messages written out—for fast searching of topics, copying and pasting to create one’s own sermons and many other useful features—meant that many dear souls had to volunteer their time throughout the years to give us yet more of Elder Frazee’s messages in typed form. Lee Shaffer, Jim Bound, Theresa Nybo, Clarissa Marshall, Angela Moore, and many others over the years have contributed to this huge project.

From 2014 to 2017 the project run at a trickle. We had run out of funding so we had to rely on volunteers. Many sincerely wanted to help but once they realized what a huge and involved project this was they were unable to do much to advance it. We realized that the only way to advance the project was to actually pay our helpers so that they could afford to devote more time to the project than just a few spare hours per month.

It came to the point where we had to say “Lord, this is Your work. If You want this project done, You will need to provide the workers as we have done all we know how to do.” In 2017, the Lord blessed us with two new transcription workers: Kristin Hannum, and Kristen Ravencroft. In only 23 months they managed to type out over 385 raw transcripts.

Elder Frazee had his own printing press and was a proofreader when he was just a youth. He had a lifelong commitment to excellent work in written material. In his honor, we have tried to do our best to make sure that these transcripts are in great shape before we release them to the general public. First, the audio message needs to be typed out from scratch. This first-typed-out version is what we call a “raw transcript.” Over the years we have developed a standardized way of formatting and editing the transcripts. Our new transcriptionists have been trained on how to do raw transcripts in the new standardized ways. This has saved a lot of time.

In the past, our goals were to get as many transcripts as possible into a final-fully edited form. That is what produced the 715 PDF files which we have on the website and included in the Complete Works Flash Drive. Now that we have such excellent workers who do so well with bringing raw transcripts to our standardized format, we have felt that the new goal is to get all Elder Frazee’s audio messages transcribed in some basic yet standardized form. As of October 31, 2018, we have reached the completion of another goal which we have named Phase I—having all of Elder Frazee’s audio messages transcribed. We have transcribed all 1673 of them. Why did we say before that there were 1,663 audio sermons but in the last sentence we said that there were 1673? Because we have several transcribed sermons of which we have lost the audio. Please join your prayers with us that we may one day find those missing audios.

As of December, 2021, we have completed Phase II–editing all the transcripts. These are now available via the Entire PDF Bundle here. Many of these transcripts are available for free as part of the Ministry Resource Page, here. We are so thankful for God’s blessing on this project and pray that you may find it a blessing too.

Thank you so much for all your support for W.D. Frazee Sermons 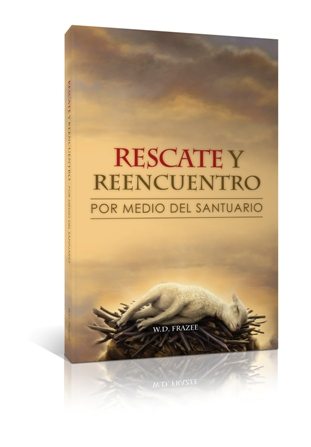 W.D. Frazee Sermons is not only a historical ministry, but we currently have a missionary family in Honduras who are doing medical missionary evangelism – Homer and Berta Barrett. They understand both English and Spanish and were personal friends of W.D. Frazee. They are the perfect couple to help translate Elder Frazee’s materials into the Spanish language! They currently have translated a few transcripts that you can download here.

They are in need of funds to keep the translations coming. If you speak Spanish or would like to support those who do with more powerful materials in one of the most widely spoken languages of the world, please donate using the Translation Fund button below: